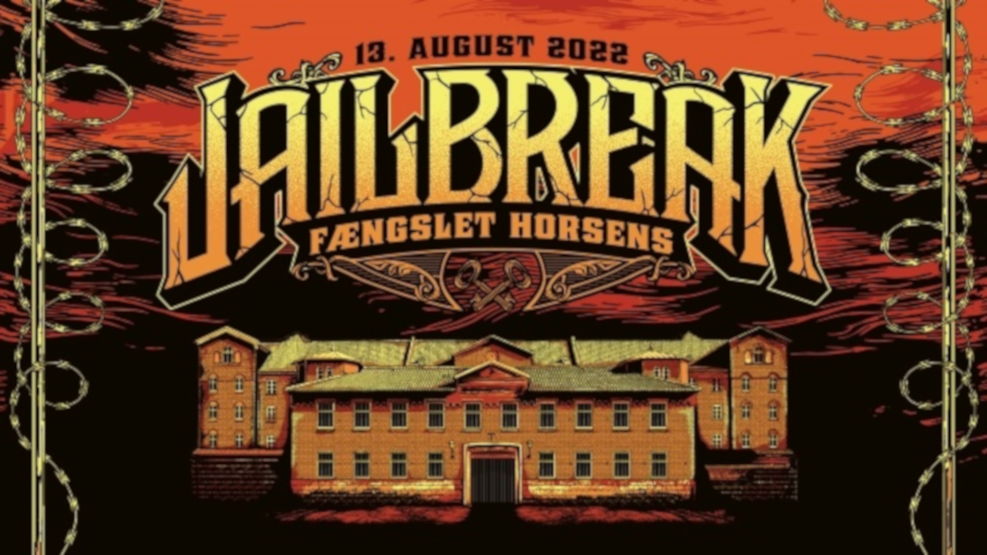 Distorted guitar riffs fill the air at this one-day heavy metal and hard rock festival behind the barbed wire walls of the old state prison in Horsens. A lineup of established international and Danish acts awaits.

Once a year, the old state prison of Horsens is turned into a battlefield of heavy riffs and hard-hitting drumbeats when the Jailbreak metal festival opens the gates to the formerly locked-up building. The line-up offers well-known international headliners and an exciting and varied assortment of hard-hitting bands. The festival offers concerts on two different stages ­ – a large stage in the inner yard of the prison and a smaller indoor stage. Jailbreak is a one-day event with concerts from midday to midnight.

When Jailbreak opens its doors for the first time on the 13th of August 2022 the festival offers an exciting lineup of bands:

Sabaton: Swedish heavy metal band with a four-time platinum album and concerts on some of the world’s biggest stages under its belt.

ACCEPT: One of the biggest names on the German Metal Scene owing to the band’s importance and popularity as trash metal pioneers in the 1980s.

HammerFall: This Swedish power metal has been a bright star in the metal sky for three decades.

Phil Campbell and the Bastard Sons: Band of the legendary Motörhead guitarist together with his three sons and the frontman Neil Starr.

King Buffalo: American trio that has garnered popularity through their unique mix of psychedelic heavy rock and elements from blues and stoner rock.

Jesper Binzer: The frontman of Danish rock band D-A-D is visiting JAILBREAK with his solo project. Binzer is known for his particular blend of hard rock.

Steve ‘n’ Seagulls: You probably haven’t seen anything like this before. Finnish bluegrass band playing cover songs on an enormous arsenal of acoustic instruments.

Skullclub: Exciting and eclectic Danish rock band from the city of Kolding that combines folk, punk, sing-along rock and rock and roll.

Get the full festival experience by bringing your own tent to the lawn of the outer prison yard of the old prison. Sleeping on the prison grounds is possible on the nights before and after the concerts. You can also sleep in your own camper or caravan in a separate section of the camping grounds.

Book your ticket here and choose if you want to sleep on the prison grounds.