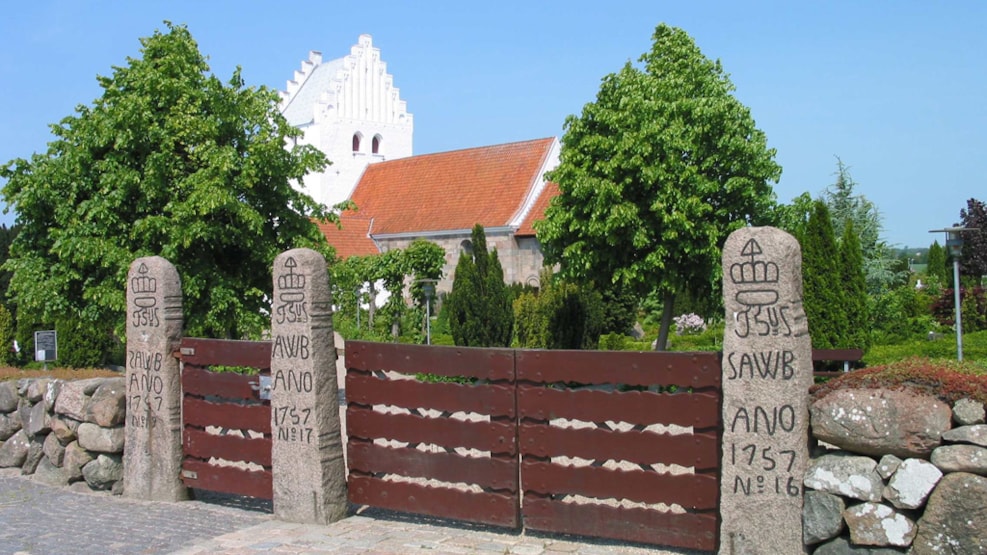 Royal stones by the Hundslund Church

Standing upright like soldiers the three so-called hunting preserves stones mark the entrance to the Hundslund church. For many years this type of ancient monument did not catch the attention of experts. It is only in the last few decades that these stones have been considered worthy of preservation.

These stones are a unique type of ancient monuments originating in historical times. The are tall and hewed from granite. Furthermore, they are characterized by the carvings on the front of the poles that always share the same structure. A crown is carved into the top of the pole, just on top of a royal monogram. Below the monogram you can see initials that tell you what district the stone is in and the year it was made. On the bottom of the pole you can see the stone's number within the district.

The stones are boundary markers that mark the boundaries of the royal hunting preserves that were scattered around the Danish landscape. These hunting preserves were primarily founded during the era of King Frederik II.

The poles were not erected until the era of King Christian IV, and it was not until 1681 that it was required that hunting preserved were marked with boundary markers. The idea behind the poles was to ensure that they could be seen from afar so that no one could say that they did not know they were on royal territory.

They were placed with a distance of 1-2 kilometres. They were placed on very visible locations such as ridges or mounds. Peasants who lived within the hunting preserves had to accept that they could not hunt in the area and therefore their dogs had a part of their  left front leg chopped off.

Today there are 120 registered hunting preserves stones around the country, but only few of them are placed in their original location. Most of them were originally placed far from were youcan see them today. It is believed that the stones at Hundslund Church were originally placed at the nearby Åkjær Manor.