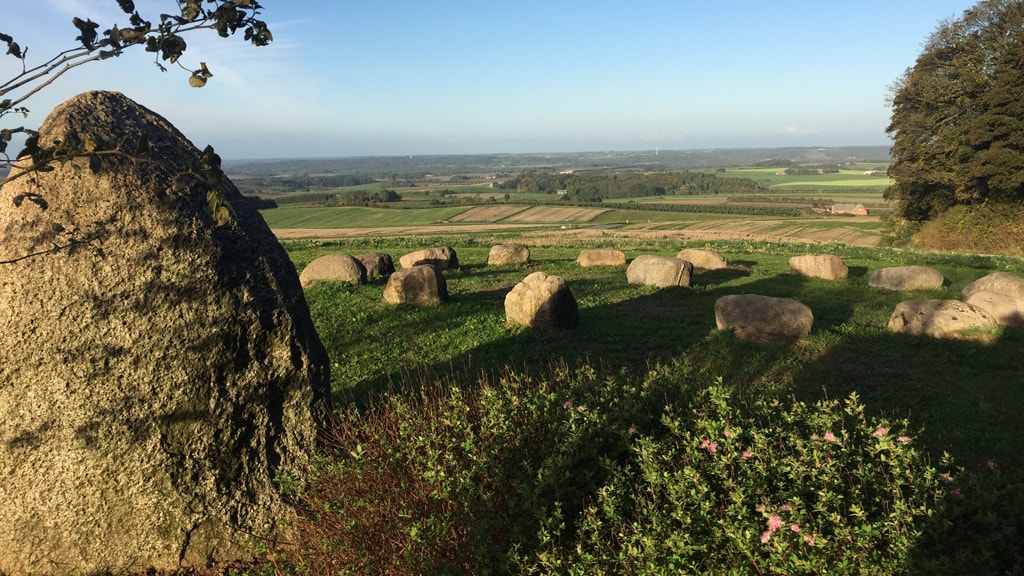 You will find many of the biggest hills of Denmark in the beautiful, hilly and forested area between Horsens and Silkeborg. The highest of them all are found in Ejer Mountains (Bjerge). Here, you can climb to the top of Denmark’s summit at an altitude of 172,54 metres ASL and enjoy an amazing view surrounded by lovely nature and historic burial mounds.

Climb “mountains” in the Danish Lakelands

The area called Ejer Mountains is characterized by idyllic villages dotted between forests and farmland, connected by narrow, winding roads in undulating countryside. The area is a good place for a bicycle ride, and you are guaranteed a sweaty brow.

Up here in the thin air, you will pass Denmark’s highest points. The top of Yding Skovhøj is found at an altitude of 172,54 metres above sea level. When you are on your bike the hill rises 85 metres from the bottom to the top, but if you want to reach the summit, you will have to get off the iron horse and enter Yding Forest. From here you go for a hefty but short climb to the summit where Denmark’s highest point awaits.

It has been widely discussed over the centuries. What is actually Denmark's highest point? Over time, several different points have held the title but, as the means of measurement have become more precise, it is now possible to measure heights down to a one-centimetre accuracy. So, today there should be no doubt, right?

In fact, discussions are still ongoing as to which hilltop should hold the honourable title. There are several hilltops in the uplands north of Horsens the height of which vary by only a few centimetres.

There are three Bronze Age burial mounds at the top of Yding Skovhøj. The top of the centre one measures 172.54 metres above sea level. This is more than 1 metre higher than Denmark’s second-highest point. Critics argue, however, that the Bronze Age burial mounds are man-made and, therefore, not natural. According to this approach, they should not be included in the measurement.

In that case, Yding Skovhøj is a mere 9 centimetres short of the title of the highest point of our kingdom. In other words, whether Yding Skovhøj deserves the honourable title is a subjective assessment.

What do you think?

Yding Skovhøj is located in the southern outskirts of the Danish Lakelands, very close to the river Gudenå.

Not far from here is the Sugar Loaf (Sukkertoppen). The Sugar Loaf is a hill that - because of its height of a mere 105 metres - is dwarfed by Yding Skovhøj. However, the views are magnificent and among the absolute best in Denmark. From the top you have views of the most beautiful part of the Gudenå area which is the area around Mossø. At the base of the Sugar Loaf, you find the idyllic Klostermølle which, besides the historic buildings – including Denmark's longest wooden building, has a nice camp site for canoers and a beautiful view of the end of Mossø.

And you are only about five kilometres from the Uncovered Bridge (Den Genfundne Bro) – a culturehistoric gem in beautiful nature, and the biggest attraction in the area.

Do you want to visit more vista points in the area?

Follow this link to read more about vista points near Horsens.