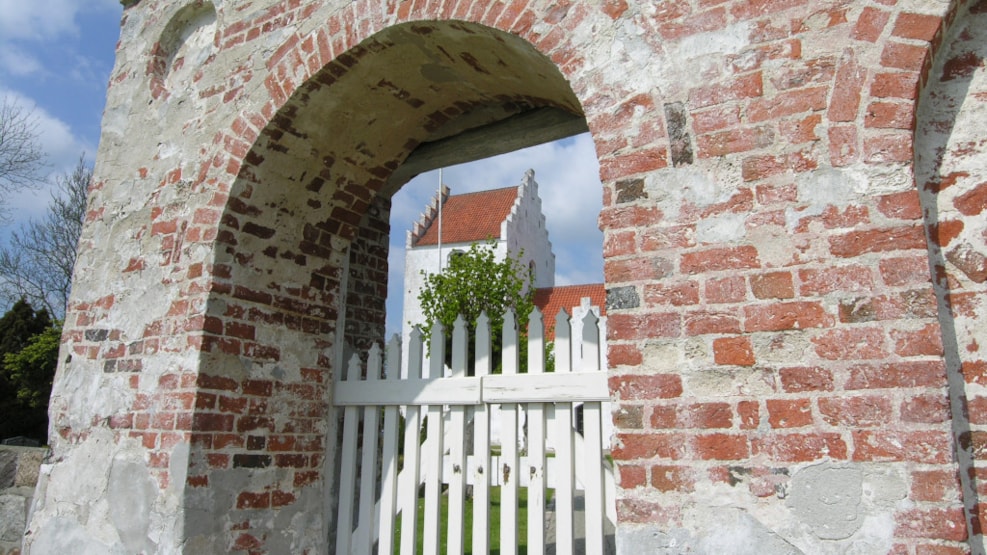 The nave, chancel and apse were built in Romanesque style towards the end of the 12th century. The tower and porch were added later in c. 1350. The porch has subsequently been rebuilt several times, however. The original entrances to the south and north are still in use today and are distinctive inasmuch as they do not face each other.

Two stone gateways to the west and the south of the churchyard date back to the late Middle Ages.

The church was closely connected with the Åkjær estate, as can be seen in the chapel on the north side of the chancel. This was built in 1748 for the burial of Hedevig Margrethe Bornemann of Åkjær.

The late Renaissance altarpiece dates from c. 1635-40, and also has Baroque elements. It is the work of Peder Jensen Kolding, the most prominent woodcarver in eastern Jutland at the time. The Romanesque font (c. 1225), decorated with lions and leaf motifs, is supported by a cube-shaped base carved with men´s heads protruding from the corners.

In the chancel, there is a plaster figure of Christ made in 1893 by the Falling sculptor Rasmus M. Andersen (an apprentice of Bissen, the wellknown sculptor).

The chancel arch is preserved in its original form. The moulded string course is decorated with carvings above double cable mouldings. The motifs include vines, a springing lion and a tree or a plant. Outside the church, the stone carver´s art is represented by a number of ashlar blocks.

The church is open when the sexton is on the churchyard.