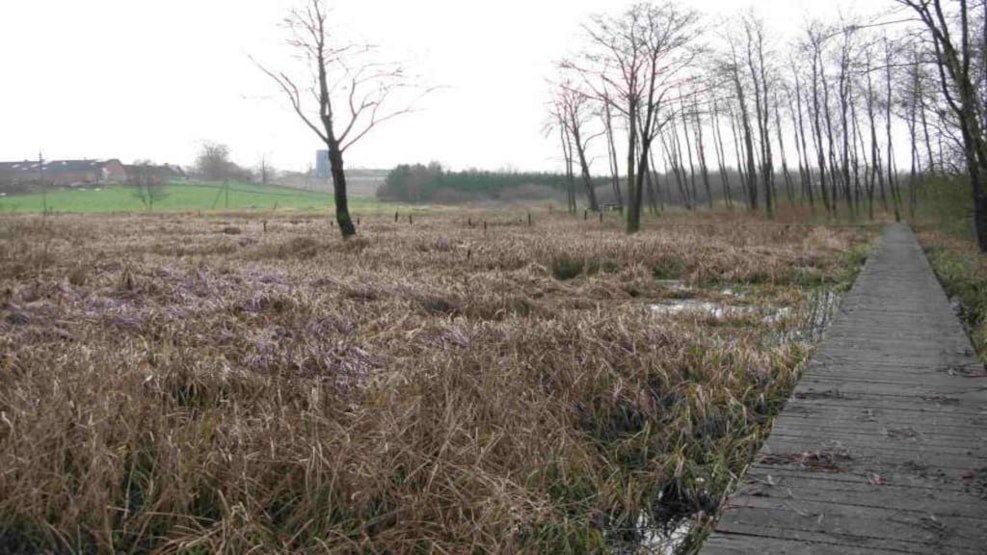 The medieval castle Boringholm was built in an bog in the 1360’ies. The castle was made of wood.

The remnants of the medieval castle Boringholm is located in a bog in the village of Boring by Boring lake. In mediaval times, Boring lake, which is also called Rask lake, was a larger shallow watered lake, but thourough draining in the 1900’eds reduced it dramatically. Today, Boringholm is surrounded by forests, meadows and farmland.

Dendro chronological examinations have shown that the castle was built in two phases. The oldest part started in 1368, but already in 1380, it was extended substantially. The latest repairwork on the site happened in 1401, and thereafter the castle was left and burned down.

Today, almost nothing remains of the large wooden castle. It lies as a flat bank in boggy terrain and a palnk bridge leads from out to the site.

Boringholm has been a larger fortress in wood on a long oval bank surrounded by bulwarks and the primary defense was the surrounding bog. The entrance happened by two bridges, one to the south, which led to Boring village and one to the north. When the castle was fully built, there were four timbered buildings.

In the first phase of the castle, the most southern buildings were built on a natural long bank. The bank was gradually extended to the north and around 1380, in the second phase of the castle, the castle was extended considerably so it became thrice as large. That was the final size of the bank. On the same time new building were built on the bank. Dendro chronological examinations show that the last work on the castle was made in 1401.

The oldest known written source about the Boring area is from 1323, as the Brok family gets the deed. But it isnt mentioned as a farm with a fortifications until year 1400. That is undoubtedly Boringholm. The place was passed to the crown in 1365, and it is likely that the castle was built during these troubled times in the end of the reign of Valdemar Atterdag, where, amongst others, the nobilty from jutland attacked the royal throne. Whether the castle was made by the king or his enemies remain unknown. In 1406, a source confirms that the castle belongs to Margrethe I and that indicates that the fortification was demolished at this point.

It is presumed that the nearby Rask Hovedgaard took over from Boringholm, but there are no written sources that can confirm this belief.

Boringholm was excavated by meseum inspector Christian Axel Jensen and architect C.M. Schmidt in the years 1906-16. During the excavation, a wealth of finds were made, amongst others swords and shields which gives a unique look into the medieval knights gear. Good conditions for conservation means that a lot of finds of organic material were also made – for example timber, barrels, tools and leather shoes. Alle these types of finds from Boringholm takes an important place in Danish mediaval research. Furthermore, the castle held one of the most important collections of wagon parts from year 1300. All the objects are today at the national museum.