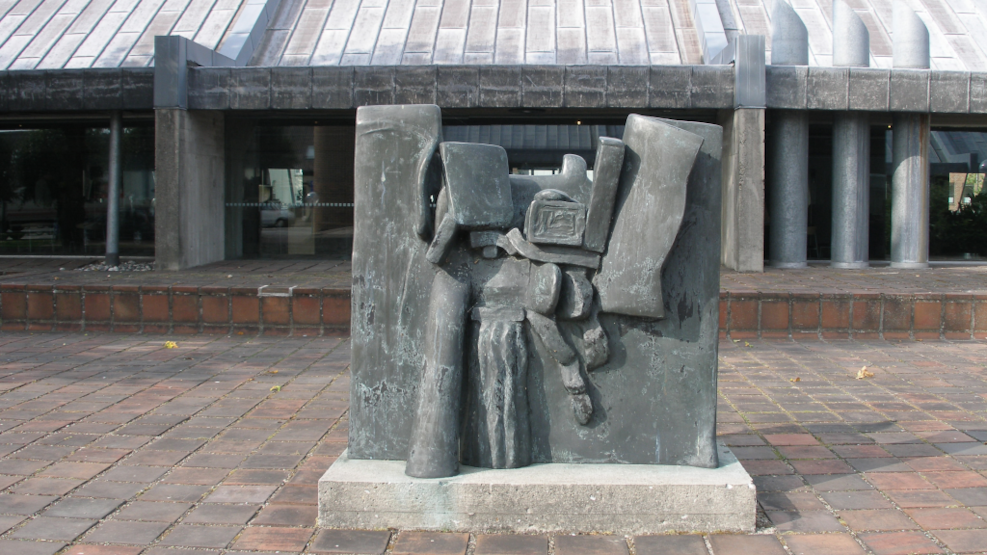 The park area around the town hall is decorated with three works by Professor Willy Ørskov. The three sculptures - two bronze and one of stone, is not specifically targeted for the town hall's distinctive architecture, but emphasizes the character of the building with their own organic manifestation.

Odder Town Hall was built in 1972 as a result of a structural reform which reduced the amount of municipalities from 1386 to 275. The heavier load of administration resulted in the emergence of new town halls all over the country.

Odder Town Hall is designed by the internationally renowned architecture firm ‘Friis and Moltke’ which was also responsible for the extension in 1980.

The u-shaped building has two main entrances which face each other. One favours the arrival of cars by being placed opposite the parking area. The other is situated at the top of a courtyard which works as a transition zone of adjustment. As visitors walk in from the side of the building they are met by a hall which steadily expands as the eye moves around. The sense of gentle openness is enforced by a first floor which is shaped as an open gallery with offices to the side.

There is a significant play between the heaviness of the building from the outside to the sense of openness inside, a sense which is reinforced as you walk down the stairs from the car park and straight up the stairs to the open hall.

The architectural expression: Brutal and honest
The architecture follows the notorious style of ‘Brutalism’ which peaked in the late 1960's. It is renowned for its blockish structures, its use of raw concrete surfaces and its blatant exposure of mechanical and structural elements such as pipes and ducts. In the light of this, the town hall might strike the visitor as heavy and uninviting.

The entrances are hidden, windows seem small dots of openings, and the roof on the garden side presses down the front as a giant headache. The over-dimensional door-handles, rails, banisters and chains by the drain pipes seem overpowering as they undermine the human scale. However, a closer look at the building tells a different story. It suggests a friendly and honest interest in the users.
The lack of a monumental entrance and the sense that the building is digested from corners and edges reveal a building with no dominant force of control. Contrary to common belief there seems to be no obvious barrier between the public and the authorities.

What is implied is a local, down to earth anchorage which is also embodied by the choice of colours and materials inside. The artist Emil Gregersen decorated the interior by combining colours in close dialogue with the building. The colours used are typical 1970’s earth colours such as dark green, brown and olive green. The olive green has been interpreted as the embodiment of light as it is perceived in Odder.

The colours speak out from rails, banisters, pipes and large metal squares which communicate across the long hall in order for the visitor to digest it.